The Fleshers are fifth in order of precedence of the Nine Incorporated Trades of Dundee.

From the earliest times there must have been considerable rivalry between the various Trades. The best record of this comes from one of the most obvious pieces of satire to be publicly displayed in Dundee.

Before the Reformation, in the Old St. Mary’s Church, each Trade had its own Altar and Stall. Above the Baker’s Stall was carved the words “bread is the staff of life”. Undaunted the Flesher Trade had the immortal words “man shall not live by bread alone” carved above theirs.

The Flesher Trade rarely had more than between ten and twenty Masters. It may well be that because of their small numbers, or perhaps because they were always struggling to keep themselves solvent, they were less able to devote time to the important work of the Nine Trades. No Master was elected from the Trade as Convener, until 1794, when William Watson was appointed. Thereafter no more were elected until recent years, by which time the purpose of the Trades was predominately charitable and not directly connected with the work of the butcher.

In common with the other Trades’ the Fleshers support charities, other projects and of course support the work done by the General Fund Court of the Nine Incorporated Trades of Dundee. 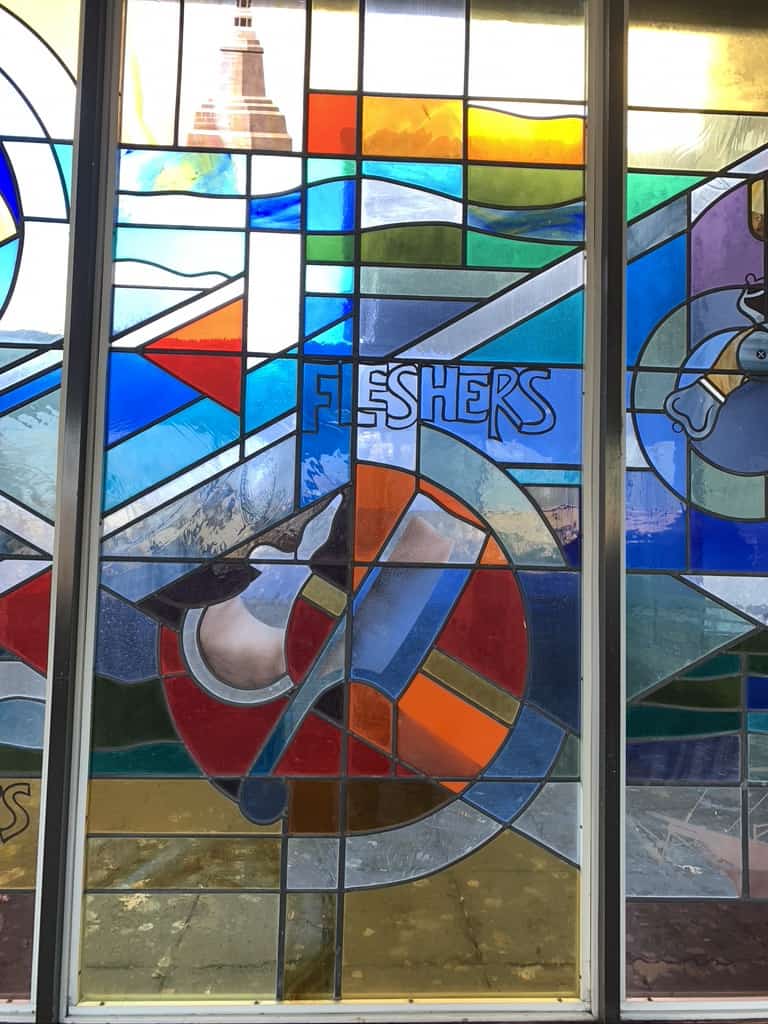 The Flesher Trade is undoubtedly one of the oldest and most important of the Crafts in any Town and Burgh. Sadly, only by gleaning information from the records of Acts of the Privy Council, the Acts of the Convention of Royal Burghs, Dundee Burgh Records, Warden’s Burgh Laws and early histories of the town, can we piece together the early part of the Flesher Trade history.

The Flesher Trade was not one of the large trades in terms of numbers, rarely having more than between ten and twenty Masters. Even in the year 1859, when the population of the town had more than doubled in the previous 100 years, the total number of Masters in the Craft was only nineteen. As with the other Trades the Flesher Craft tended to be dominated by the same families.

Indeed even today, despite the advent of Superstores, there are a number of thriving family businesses with connections to the Flesher Trade going back several generations.

Many families with long ties to the Flesher Craft still have businesses in the City. The names Robertson, 1884 (now Craig), Scott Jarron, 1935 (now Scott Bros.), Fitzgerald, Black, Grossett, McKay, 1960 (now Irvine), Gray, Piggot and Matthew spring to mind. Many of these modern Masters have given valuable service and held office in the national bodies of their Craft and individually are winners of many awards for quality and service. Throughout recent difficult trading times these Masters have innovated and brought best possible practice to their chosen Craft. Their forerunners in the Craft would indeed be proud of their achievements.

Today the Craft numbers are in the twenties or and it is a thriving, solvent and forward- looking Trade. A proud and important group of men, its future is assured and it takes a prominent place in the development of the Nine Trades.

END_OF_DOCUMENT_TOKEN_TO_BE_REPLACED

No news items to display.
END_OF_DOCUMENT_TOKEN_TO_BE_REPLACED

Each trade supports a number of charities and good causes. The good causes that the Fleshers fund are:

No items to display.